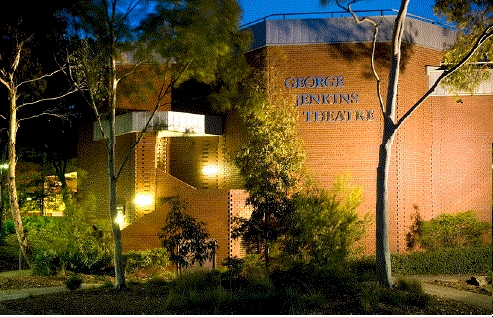 The George Jenkins Theatre, the Peninsula’s Playhouse, is an intimate 426 seat venue ideal for plays, dance, concerts and conferences. Comprising a thrust stage with raked seating on three sides, this is one of those rare venues which really doesn’t have a bad seat. Versatile stage access and five dressing rooms allow for movement of large casts while the seating configuration makes the venue equally ideal for conferences, lectures or other focused presentations.

Its large thrust stage has ample wing space on either side of the stage and a cross over at the rear, as well as three winched scenery lines, house curtain and additional traveller curtains at mid-stage and rear. Stage access can be made from side of stage as well as via two vomitories under the seating bank. Basic lighting and sound are available for one or two night events, providing for smaller organisations and functions, while a full lighting design can also be accommodated for extended theatre seasons.

A fully licensed cafe is connected to the foyer and services patrons pre-show, at interval and post-show if required. For your opening night or after-show party, we can provide a drinks and refreshment service.

There are five dressing rooms including green room/rehearsal room, with benches, mirrors, hanging facilities, hand basins, showers and toilets. Direct access to stage thrust and either side of stage.

The theatre is fully accessible via a lift in the foyer and removable seats allow for up to four wheelchairs to be accommodated.