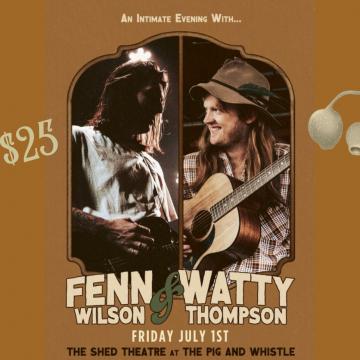 The Pig & Whistle - The Shed Theatre posted in Music

Watty Thompson has emerged as a powerful, moving and unique folk performer in Australia’s storytelling tradition. A little bit country, a little bit folk, 100% heart. Watty's still-young history of performances has captivated audiences around Victoria and there are plenty more on the horizon. Following 2021's celebrated debut single 'The Beauty That Surrounds Ya, Watty has just released his second single, 'Jenny', taken from the forthcoming debut album.
Fenn Wilson’s lyrics turn pain into poetry, laced with light; compassion and wisdom beyond his years imbue every line. He is mesmerising on stage, either solo or surrounded by his skilled and sensitive
sidemen, creating thunderstorm dynamics reminiscent of Jeff Buckley. Fenn’s songcraft is astounding. Memorable hooks abound, without a trace of gimmick or cliché.....and then there’s his voice. He has just released a second single, 'Laying With The Bones', taken his forthcoming sophomore album.
Come and witness this one off special event as both Watty Thompson and Fenn Wilson bring their bands to the Pig and Whistle for an intimate evening of captivating storytelling and musicianship.

"(Watty Thompson’s) authentic songwriting and meaningful storytelling have the ability to take you on a warm and poignant sonic journey, anchored by his unique vocal, lush instrumentals, floating over country-tinged guitars and ethereal folk soundscapes."
- Forte Magazine
"Fenn Wilson is one of my favorite singers in the world."
- Tim Rogers, November 2021