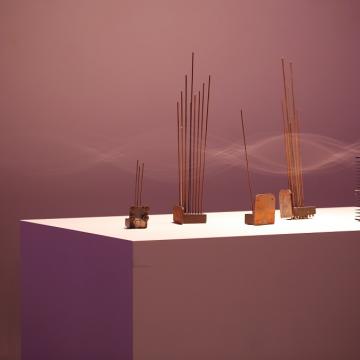 Tues-Sun, closed most Mondays and some public holidays.

Dissonant Rhythms is Brisbane-based artist and musician Ross Manning’s first-ever survey exhibition. Best known for his use of everyday materials, Manning’s exhibition features sculptures that repurpose electric fans, fluorescent tubes, and overhead projectors. Propelled by electricity and their own kinetic forces, Manning’s work engulfs the entirety of the spaces they exist in, creating mesmerising experiences of light and sound.

Spanning the past decade of Manning’s practice, Dissonant Rhythms was originally presented at the Institute of Modern Art (IMA) and has now been reconfigured to tour across Australia. Dissonant Rhythms is curated by Aileen Burns, Johan Lundh, and Madeleine King.

A travelling exhibition organised by Institute of Modern Art (IMA), toured by Museums & Galleries Queensland. This project has been assisted by the Australian Government through the Australia Council, its arts funding and